FAQs - All FAQs
Who are you?

The "e.U." in the name stands for "eingetragener Unternehmer" in German, or - freely translated to English - "registered independent business owner".

The name of the company is therefore the same as the name of our main product, the only difference is the "e.U." suffix.

Why then are we referring to us as "we" on these pages? Because despite Wing Helper e.U. legally consisting of only one person, the Wing Helper product is a joint effort of a multitude of beta testers, pilot colleagues, friendly internet forum members and other Wing Helper users all over the world. Without their valuable input, Wing Helper would not be where it is today!

What is Wing Helper?

Wing Helper is a state of the art parametric 3D CAD program for design of RC planes. In the version 1.x, Wing Helper supports the definition of the main wing. In future releases, we will be adding support for empennage, fuselage, electronics, and so on.

Traditional parametric CAD programs force the user to enter huge amounts of data without much (if any) visual control. On the other hand, CAD programs such as AutoCAD or Blender are based on a pure graphical manipulation of data. This approach allows a huge degree of freedom (you can draw anything, from the screw to the space ship), but it also imposes a very steep learning curve on the user.

Wing Helper allows you to define your construction by specifying the numerical data (parametric approach), while at the same time representing the effects of your changes visually in a "live view" window. Wing Helper is not a general purpose CAD program, it concentrates on a single task, and makes this task as simple as possible. By following this philosophy, Wing Helper combines the best of both parametric and visual worlds.

What do I get if I buy the license?

The first and the most important: you get the right to use the Wing Helper application on your computer to its' full extent, also beyond the trial period.

The Wing Helper roadmap will be produced and published on this web site based on the customer feedback - the more feedback we get, the sooner we will be able to set the route for the future development.

What kind of computer do I need to run Wing Helper?

Wing Helper does not impose big demands on the hardware, but if you are unsure, please ensure the suitability of your system by downloading the Wing Helper evaluation version from this site and testing it on your computer.

Do I need to be 3D graphic designer or have some special CAD knowledge to use this program?

Absolutely not! We are striving to keep Wing Helper as simple to use as possible. Please take a look at the documentation section of this page for a video showing how easy it is to work with Wing Helper!

How do I start?

The righ place to start is the "Add" button in the upper left table of the main window. Pressing this button opens a window where you can create the first wing panel by specifying the dimensions, the airfoil, the number of ribs, and so on.

You might also want to consult the manual and to watch the video tutorials in the Documentation section. 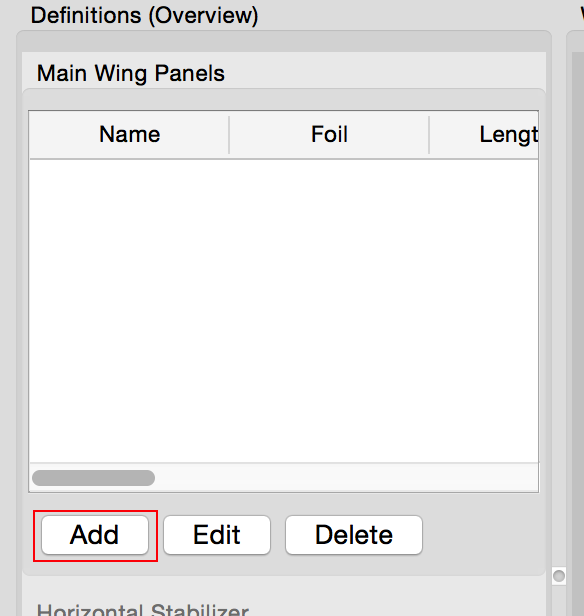 How do I change the view in the 3D window?

If you let your mouse cursor float for a while over the 3D window, a tool tip with the explanation will pop up: 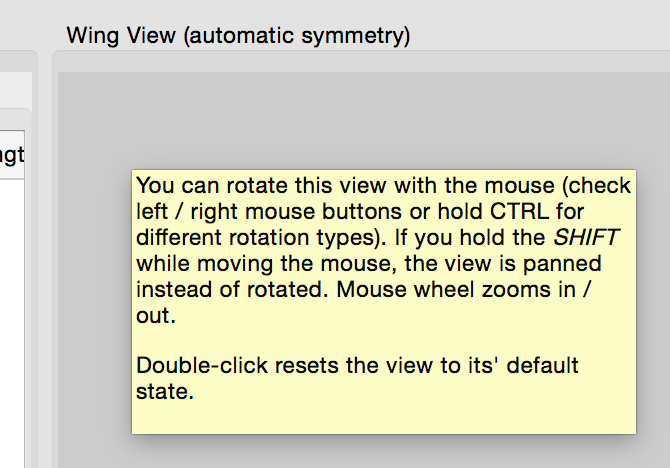 How do I change the program language?

Menu Edit -> Language. Currently, the choice is between German and English. Please note that this snapshot was done on OS X. If you are running Windows or Linux, the menu will look slightly different. 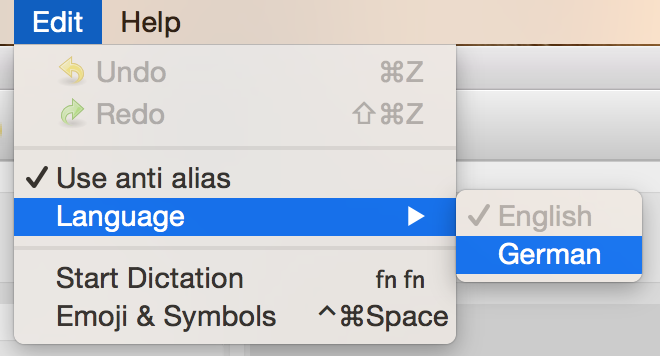 Yes, you can use decimal numbers, but please make sure you are writing them with the decimal separator as used in your country, respecively as set on your computer. Usually, in the US, the decimal point is used (e.g. 123.45), while Germans use a decimal comma instead (e.g. 123,45).

The compatibility of the DXF file export was tested with Libre Cad 2.0.2, Draft Sight 2015 SP1, Turbo Cad 16 Professional, Rhino 5, as well as AutoCAD in versions 2007, 2014, and 360. In case of incompatibility of the Wing Helper DXF output file and your prefered CAD application, please try converting the file using one of the aforementioned programs. Libre Cad is free of charge (Open Source) and can be downloaded from Internet.